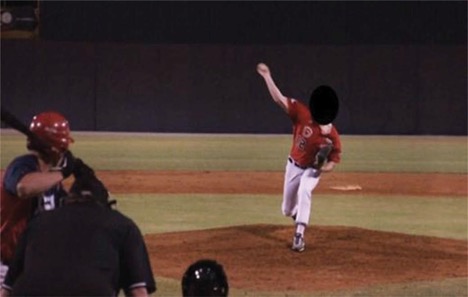 When teaching a new motor skill or game tactic, coaches rely on their athletes being able to take what they learned in practice and apply it during a game despite multiple changes in the environment, emotions and minute by minute situations.

For baseball hitting instructors, this is especially true when teaching pitch recognition and plate discipline. Facing the same pitchers in batting practice every day doesn’t provide the breadth of delivery mechanisms and early ball flight cues that players will see from multiple pitchers during an entire season.

Even with a single game, pitchers can change. For six to seven innings, hitters may begin to pick out hints from the right-handed starter tipping them off to a change-up versus a fastball or a curve versus a slider. Then, a lefty is brought in from the bullpen with an entirely different pitching motion and pitch inventory. Being able to quickly change visual perception to adapt to this new stimulus is the goal of learning transfer theory.

“This means that learned visual anticipation skill needs to be adaptable to variation in visual–perceptual information that is encountered in a game setting in order to maintain visual–perceptual motor performance,” wrote Sean Müller, Peter J. Fadde and Allen G. Harbaugh, authors of a new study recently published in the Journal of Sports Sciences. Dr. Fadde is Professor of Learning Systems Design & Technology at Southern Illinois University and Chief Science Officer at gameSense Sports.

In other words, if a team can’t hit the reliever, then the opposing coach made a great pitching change. This ability to generalize pitch recognition learning from one pitcher to another is often the sign of an expert hitter with the years of experience to know what to look for.

To speed up this process, pitch recognition training systems are designed to show hundreds of pitch repetitions to a batter so that his brain can build a visual memory framework to use during a real game. Seeing the same pitcher in batting practice every day just doesn’t offer enough variation to be able to adjust on the fly.

To further the research on learning adaptability, Muller, Fadde and Harbaugh set out to measure the pitch recognition skills of expert and near-expert hitters as they viewed a left-handed pitcher (LHP) and a right-handed pitcher (RHP) during the same testing session. Hitters from two major league baseball organizations were tested during spring training.

In the researchers’ definition, an expert hitter was one that had playing experience in Major League Baseball, Triple-A or Double-A leagues while a near-expert hitter played in Single-A or lower leagues. The total population sample was 125 players, 30 experts and 95 near-experts, who had distinguished themselves from novice players by being signed to a professional contract.

The two groups of players were shown video footage of two pitchers, one RHP and one LHP, with a variety of pitch types, inside and outside of the strike zones. Their job was to identify the pitch type (fastball, curve, or change-up) and the pitch location (strike or ball), using a temporal occlusion method that didn’t allow them to see the entire pitch. This means that the video was stopped at four different times across the testing period; at ball release, 80 milliseconds after ball release, 200 ms after release and then the entire pitch sequence as a control group. The total time for a pitch to reach the plate was 440-520 ms.

The video footage was recorded during an actual minor-league game from behind the plate. The view was cropped to show just the pitcher, the batter, the umpire and the catcher (see Figure 1). Using this point of view was intentional by the researchers to understand if batters could predict pitches just as well as when they were standing in the batter’s box. As a practical scouting matter, real game video is much easier to obtain from a seat in the stands behind home plate during a game than arranging staged pitching sessions to record video.

As the researchers expected, both the expert and near-expert groups were able to adapt well between the two pitchers, scoring above simple guessing probability in both pitch type and location across all of the temporal occlusion tests.

However, there were a few subtle differences. Both groups had a little more trouble with the LHP and the near-experts were less accurate than the experts in the early ball flight scenarios (at pitch release and 80ms after release.) Not having as much exposure to LHP helps explain their struggle there while more experienced players have advanced their anticipatory skills earlier in the ball flight.

The practical benefit of using in-game video footage was another key finding. Pitchers engaged in a competitive battle present a more realistic motion and intensity that cannot be captured with simulated, staged video recordings. So, if a coach or scout can capture video of opposing pitchers from the stands, it can be inserted into an occlusion training system to prepare hitters for upcoming games.

“Opponent movement patterns that are captured in-game create highly representative visual–perceptual information in the temporal occlusion paradigm because it displays the opponent striving at an optimal level to impart constraints such as time stress of object velocity to defeat the performer,” wrote the researchers.

Do you have in-game video of opposing pitchers that you would like to show your players in a pitch recognition training system? Contact us to learn how to import your footage into gameSense