Hitters have a lot to think about when they’re at the plate. Game situation, pitch count, pitcher tendencies and even the last few at-bats. Picking out the fast ball versus the off-speed pitch is hard enough but what if a pitcher could vary not only his speed and location but also the ball’s backspin? The visual illusion of the rising fastball depends on backspin to counteract gravitational forces during the trajectory to the plate. So, playing with different backspins would directly affect the vertical dimension of the ball flight.

Researchers at Japan’s Waseda University designed an experiment to mess with a group of pro, semi-pro and college hitters by asking them to hit pitches with varying backspins but constant speeds. Their research appeared in the Journal of Applied Biomechanics. 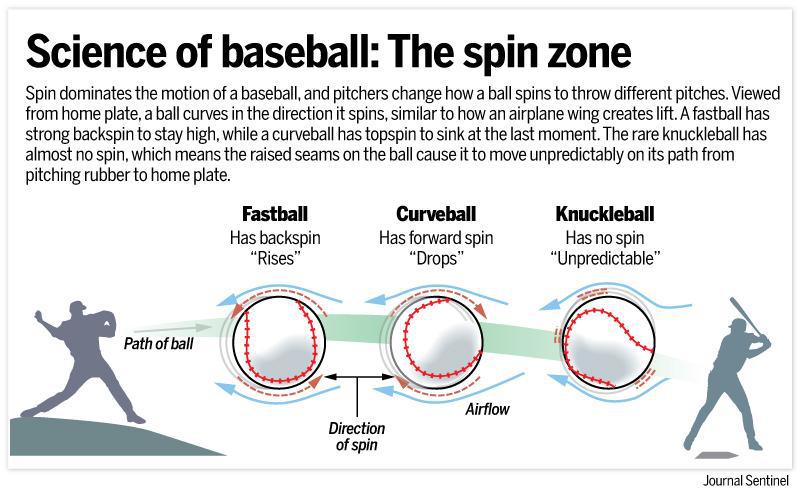 According to the laws of the Magnus effect, the rise and fall of a spinning ball depends on its backspin or topspin, respectively. Just as a curve ball is thrown with topspin, causing the “roll off a table” effect, a fastball is delivered with a two-finger release on the seams and a downward flick of the wrist causing backspin.

Hitters are fooled when their anticipated trajectory does not match the actual trajectory. They expected the ball at the plate to be an inch lower but the backspin kept it up slightly, producing the appearance of a “hop” at the last second.

“Therefore, this study was conducted to test the hypothesis that an increase in ball backspin rate of a fastball would result in a greater distance between the sweet spot to ball center at the moment of ball-bat contact,” wrote Takatoshi Higuchi, Ph.D. and his colleagues. “To test this hypothesis, elite batters attempted to hit balls launched from a pitching machine at a constant speed, but with different backspin rates.”

They recruited 13 experienced baseball players to hit 30 pitches each from a two wheel pitching machine. The researchers randomly changed the backspin rate from 30 revolutions per second (standard for most pro pitchers) to 40 rps and 50 rps. While there is no record of a human pitcher throwing at 50 rps, it served as an endpoint on the spectrum of difficulty. All pitches were delivered at a constant 81 mph, a relatively easy speed for experienced batters.

With high speed cameras on the ball and the player’s bat, the impact point was recorded then measured for the deviation (in mm) in the vertical plane from the sweet spot. Using only four-seam fastballs, the hitters performed as expected. With every 10 rps increase in backspin, the hitter’s average variance from the sweet spot would increase by 14.2mm.

“What makes a four-seam fastball hard to hit is not only its speed but also the degree to which it is difficult for the batter to predict its trajectory,” wrote the researchers. “An increased ball backspin decreases the drop of a fastball, and a pitched ball with backspin that deviates from the norm produces an unexpected trajectory which decreases the batter’s hitting accuracy.”

This slight change in elevation can be the difference between a clean hit and a ground ball or pop-up. Batters who can see a wide variety of pitchers during pitch recognition sessions will benefit from seeing different backspins and trajectories to train their eyes and brain to deal with it when facing real pitchers.

1 thought on “Baseball Pitch Backspin Can Play Tricks On Batters”