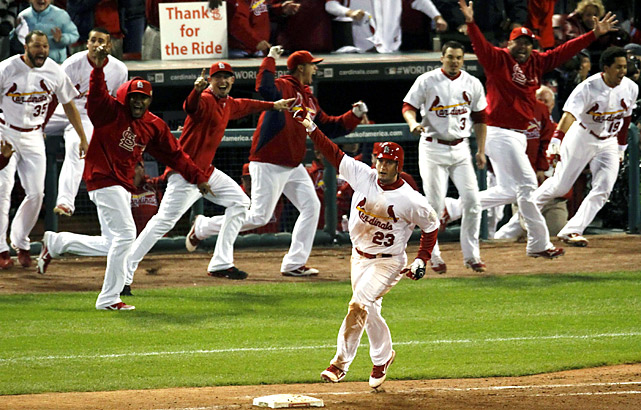 The stakes were extremely high going into Game 6 of the 2011 World Series. In the best-of-seven series, the Texas Rangers, trying to win their first championship, were up 3 games to 2 against the St. Louis Cardinals. Leading by two runs in the bottom of the ninth, the Rangers were one strike away from locker room champagne. Instead, the Cardinals’ David Freese hit a triple off the wall driving in two runs and sending the game to extra innings.

After Josh Hamilton hit a towering 2-run home run in the top of the 10th, the Rangers once again were up by two runs and one strike away in the bottom of the inning. The Cardinals did not flinch, hitting three singles to tie the game. Finally, in the bottom of the 11th inning, Freese became a Cardinals’ legend by hitting a 3-2 pitch over the center field wall for a game-winning home run, forcing a Game 7.

The final game was less dramatic, with the Cardinals winning 6-2, but the emotional roller coaster of a seven game series was evident on the faces of the players, who showed the entire spectrum of reactions from joy to nervousness to anger.

Baseball players, like most athletes, are not emotionless robots. The pressure of the moment can affect their performance. Think of the pitcher-batter duels in Game 6, where one team is one swing away from victory or defeat. The well-trained brain of the pitcher knows what to throw and the experienced batter knows what to expect. Yet, athletes can’t always mask the stress they’re feeling, giving away possible cues to their opponent. Staring back at the pitcher, a hitter might be able to subconsciously detect fear or uncertainty which may help him predict the type, speed or location of the next pitch.

That interaction is what Dr. Arik Cheshin of the University of Haifa wanted to understand. With a team that included researchers from the University of Amsterdam, he designed an experiment to measure the ability of athletes to read their opponent’s emotions so that they could anticipate their next move. The pitcher-batter face-off seemed like the ideal scenario.

“The players stand opposite each other in one of the two most famous duels in sport. The two sportspeople look each other in the eye; one makes a move, and the other responds to it. We wanted to see whether the expression of emotion offers a clue about this move — and we found that it does,” said Dr. Cheshin, whose study was recently published in Frontiers in Psychology.

From that infamous 2011 Game 6 and 7, as well as Game 7 from the 2012 World Series, he captured 92 two-second video clips of just the pitcher’s face right before the start of their throwing motion. Eliminating the rest of the background, Dr. Cheshin wanted to capture the facial emotion, if any, of each pitcher before delivering what could be a game changing pitch.

Next, he showed these clips to 213 Dutch undergraduate students, who had no baseball experience, and asked them to identify if the pitcher looked happy, angry or worried.  That process created a subset of 30 video clips that had the highest agreement on emotions among the students.

A second group of 34 students were then showed these 30 clips and were asked to predict the speed, accuracy, and whether the batter would swing at the pitch. Using this information, the students were able to link emotions with a guess of what the pitcher might throw.

“The participants predicted various properties of the pitches according to the pitcher’s emotion. When the pitcher showed anger, this led to the prediction of faster and more difficult pitches,” said Dr. Cheshin. “The expression of happiness led to predictions of more precise pitches and a higher probability that the batter would attempt to hit the ball. The expression of worry led to predictions of imprecise pitches and fewer attempts to hit the ball.”

Interestingly, when pitchers were judged to be happy, the students correctly predicted that the batter would swing more often.

“It is possible that the batter’s reaction is not conscious but evolutionary. There is a lot of pressure and tumult around the batter, and accordingly the batter sees the pitcher’s expression of happiness as a positive sign that encourages him to try to hit the ball,” said Dr. Cheshin.

The science of pitch recognition often focuses on the ball, the pitcher’s arm mechanics and the angle of release.  However, Dr. Cheshin’s research reveals a new source of information available to hitters, the pitcher’s pre-pitch emotions. Even experienced MLB pitchers, who would be expected to keep a poker face, can show slight facial expressions that our subconscious eye can pick up for clues.

Training for pitch recognition is best accomplished with video of real pitchers throwing in a real game. Without the pressure of competition, a pitcher may not reveal those subtle hints that add to a hitter’s arsenal of information.